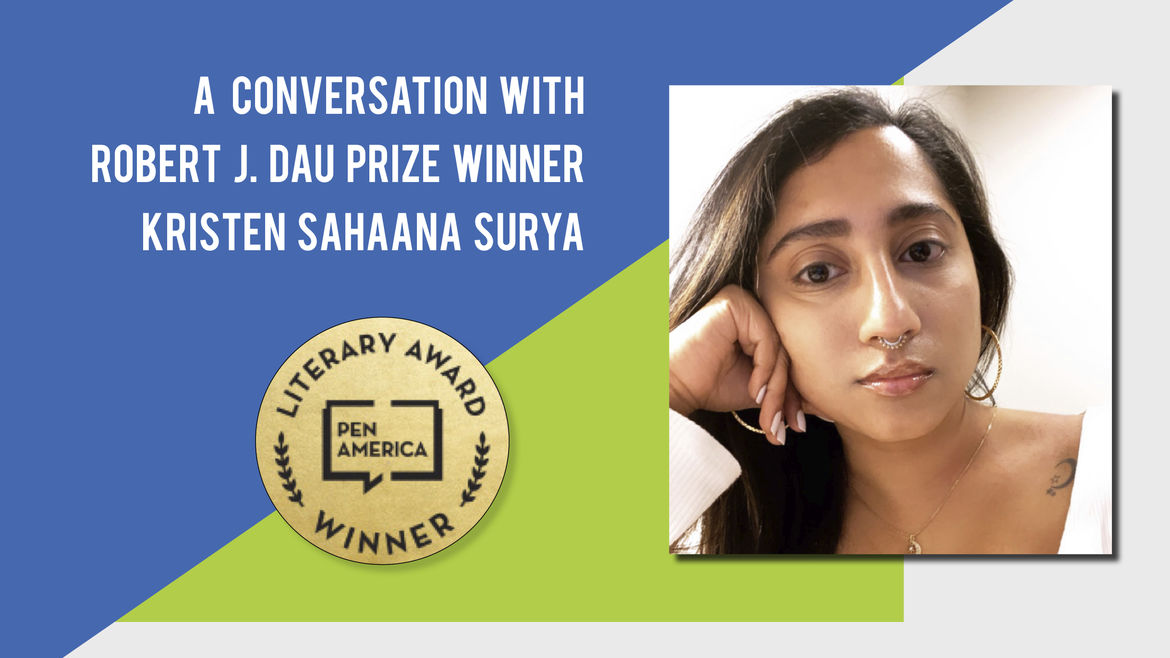 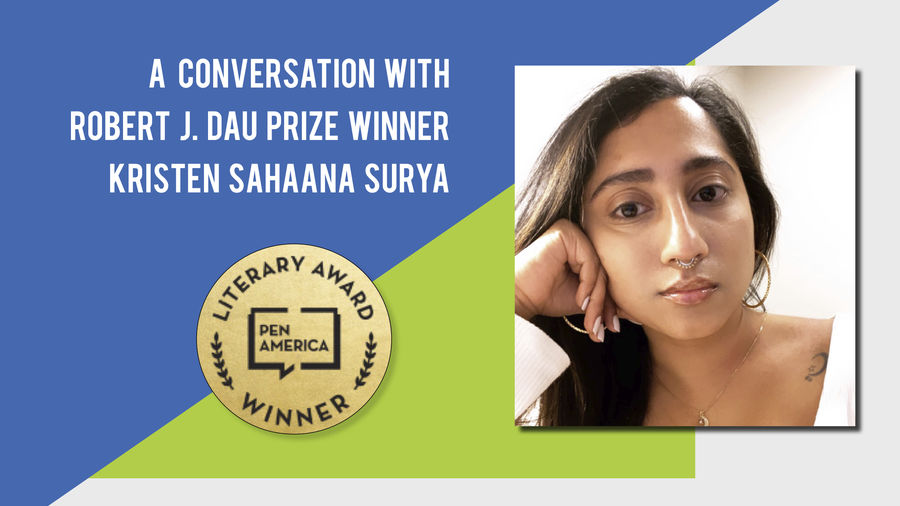 is the fourth edition of an anthology celebrating outstanding new fiction writers published by literary magazines around the world. In the upcoming weeks, we’ll feature Q&As with the contributors, whose stories were selected for PEN’s Robert J. Dau Short Story Prize for Emerging Writers and for the anthology by judges . Submissions for the 2021 awards .

Kristen Sahaana Surya is a student of fiction at the Program for Writers at Warren Wilson College. She is a lawyer living in New York City.

“Gauri Kalyanam” was originally published in The Rumpus.

Her heartbeat is a history folded into a vessel. When she is born her mother counts three beats where two should sound: an arrhythmic omen embedded in a baby’s chest. She is born black, not brown, and on her first full moon she is offered the sweet-sounding titles of fair-skinned goddesses. Her mother smells her skin in kisses and calls to her: Papa, my Papa, Chinna Papa, Kutty Papa, my darling baby girl. When she is still small her mother rubs her with turmeric powder and coconut oil, callused hands stroking soft skin, until her body buzzes with the softness and the brightness of a woman whose existence depends on erasure. Her mother’s hands snap chicken necks, pound rice, and pull her hair. Her mother’s hands hold the cash that comes in her dowry, tie the collar of the cow in their yard, and slap her face a thousand times to rid it of its ugliness. Her mother’s hands are bilingual: to her face, which they seize and smack and spit, they are hammers against nails; but to her hair, which they comb and braid softly before bed, they are the amma whose eyes refuse to meet her own.

I have an auntie—a family friend—who is a survivor of domestic abuse. She handled that experience with such remarkable strength and vulnerability—it’s always been a torch for me, and an inspiration.

First draft to final, about eighteen months. I’m a very slow writer, which is something I’ve only come to terms with recently.

Indian cinema plays an important role throughout the story, from the “filmi magazines” that Papa reads, to her own experience going to see Singari (1951) in the theaters, to the way that she recounts the plot of Devadasu (1953) to the children in her care. These references orient us not only temporally, but also culturally. How would you describe the role that cinema plays in Papa’s life, and why was it important to allude to iconic Kollywood films and performers in the story?

Tamil movie culture blows me away. If we ever get movie theatres back post-pandemic, I’d recommend that everyone goes and sees one in India, or a Tamil movie at your local South Asian theatre. Because the Tamil movie industry is both booming and localized, there’s a real homegrown quality to the films, like, “Oh, I can see exactly where this was shot.” At the same time—and I say this with the caveat that Kollywood films are much, much better about this than their Bollywood counterparts—there’s also a big gap between those watching and those on screen. Lead actresses are frequently light-skinned, European-looking women. There are a lot of people with caste privilege, on screen and off, involved with production. But it’s just like any movie industry: despite the politics, people love it. The question of Where and how do I see myself in a world that doesn’t represent me? is one I ask myself constantly as a South Asian woman in America. I liked the idea that Papa—a dark-skinned woman with a third grade education—could find a way to see herself in films that were not necessarily built to represent her, and even find relief and respite in them.

The other side is that I think so much art—especially cinema—acts as an instruction manual for women. How to be beautiful, how to be a wife, how to be desirable, feminine, etc. As a film, Devadasu is concerned with the concept of true love, but its lead actress famously experienced marital hardship. That actress, Savitri, also happens to be named after a Hindu goddess who is frequently used to represent marital fidelity or wifely devotion, but still uses her own intelligence and cunning as a means to an end. That dichotomy of “what happens to women in stories” versus “what is the reality that this woman is facing” is also something that fascinates me.

Papa’s strength and courage are so moving, especially as she faces the insidious forces of patriarchy, from forced marriage to leering men on a bus. Can you talk a bit about the inspiration behind Papa’s character, as well as your own experience telling her heartrending story?

That terminology—“forced marriage”—is interesting to me. Not that I disagree with it at all—you’re absolutely correct, that’s what it is—but I think it’s funny because I doubt Papa would see it that way. It’s more of a western lens. Marriages of that kind—arranged marriages with dowries, often with very little input or direction from the brides—were extremely common in India at that time, and continue to be common. It’s a practice that’s rooted in a lot of ugly things: patriarchy, for sure, but also casteism, which made it the means through which many families upheld the maintenance of so called “bloodline purity.” Many of the women I know who actually had marriages like this don’t think much about that ugliness; it’s very matter-of-fact to have been married off young to someone older who you barely knew. That’s just a part of life. Sometimes they say things like, “See, it’s really for the best, look how well it worked out for me.” And that is the reality of patriarchal conditioning: it’s not only the act of making a woman believe that she has no other options, but also inculcating her with belief that the system that oppresses her is acceptable, even wonderful, so that she both lives by that oppression and perpetuates it. We have these same types of cultural conditioning in the west too, it’s not just South Asian people. But I think it’s especially important to be thinking about this today, when we have Netflix shows like Indian Matchmaking glorifying South Asian arranged marriage, or at least making the practice in its modern form more palliative to Western audiences, without considering what the institution was built to uphold.

The experience of writing this was both heartbreaking and necessary. For me, I know and love a lot of South Asian women who have been through so much horror in their lifetimes and talk about it like it’s nothing, like surviving those experiences don’t require so much internal mettle. Coming to terms with the strength and suffering of the women who came before me—so that I can be here, in this way, do this work- is tremendously humbling.

This has been such a spot of light in a dark hour. The last year has been a rollercoaster—not just the pandemic-revolution combo, which I’m sure everyone is feeling, but I also lost my father just a few weeks after The Rumpus ran this story. It’s incredibly validating because I’m not doing this full-time, so I think for a lot of people in my non-writing communities, they just thought that writing was, like, a hobby or something I did for fun. It made me weird—I used to wake up early at slumber parties as a kid to secretly write. In the last few years especially, the time I’ve given to this work has created distance in my friendships. I think all writers feel this way. And it’s weird, I’ve gotten so used to feeling like a loser, and now people—like even some writers that I really respect!—think I’m legit or something. Like, I’m not even a little legit, the learning curve is still very steep. But it is also so validating at such a vulnerable time to know that this thing that always made me odd or different or unavailable has taken me here.

I have some shorts that I’m about ready to send out. I’m also working on a novel, but—well, you know how it is. I’m tearing my hair out there.

I think community is the best source for finding stuff you like—family, teachers, fellow writers. My brother is the best reader I know. But I’m also a sucker for the year-end collections—I probably buy Best American Short Stories every year.