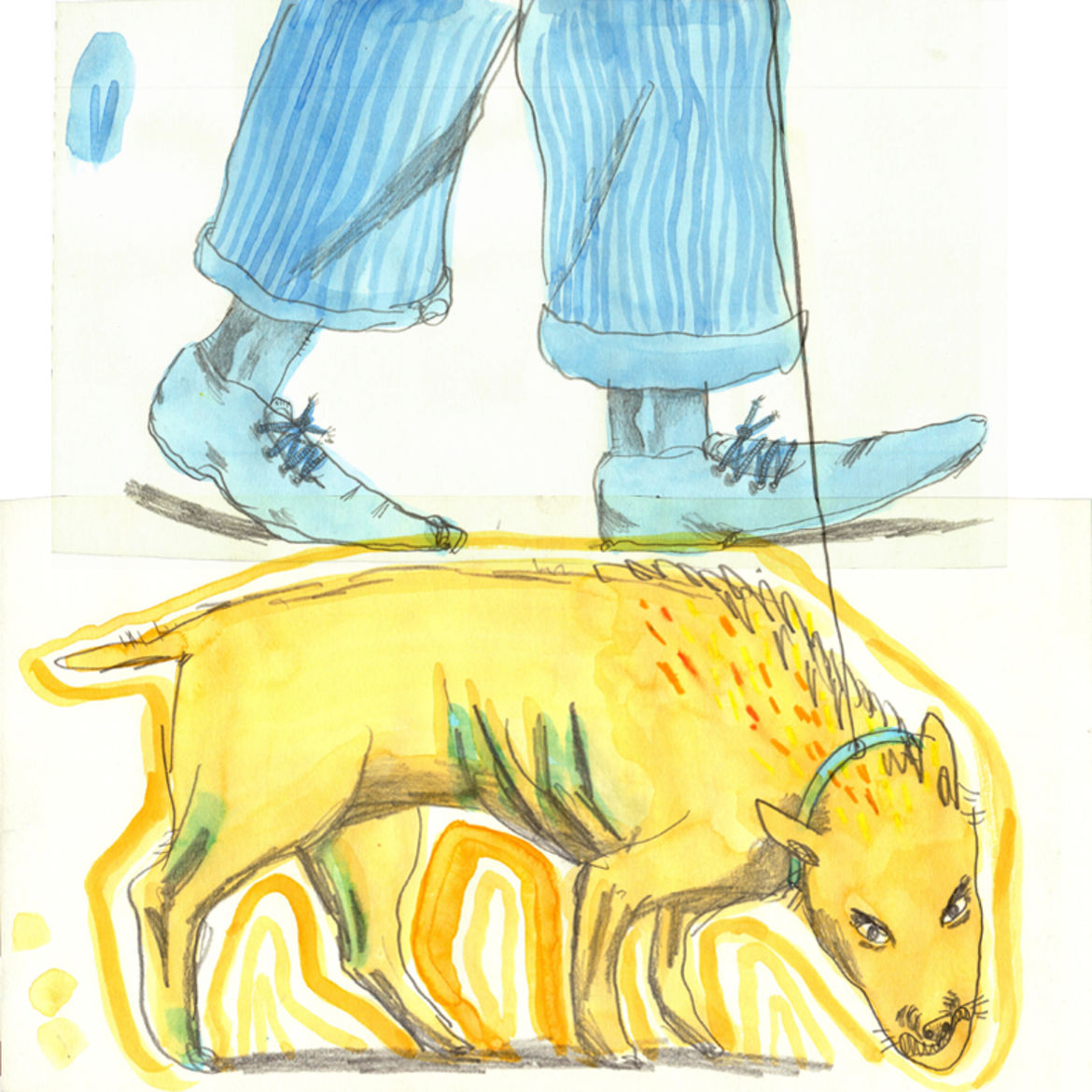 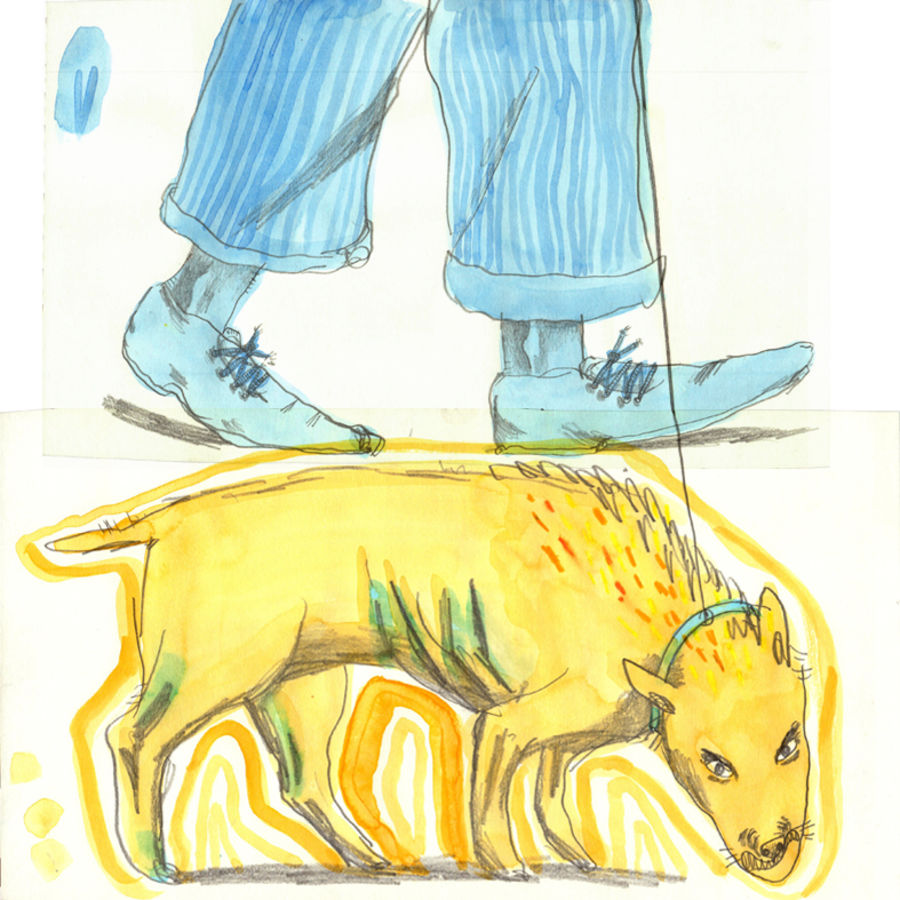 “I ran into my father three years after his death. I was on my way to the library.”

I ran into my father near Potsdamer Platz three years after his death. I was on my way to the library in the Kulturforum. The doors opened at nine o’clock sharp and I had an ongoing bet with myself that I would be the first to get to the secluded desk by the window, tucked away behind the security guard’s station. There was a LIBRARIAN nameplate on it, but no one ever sat there. The Assistant Librarian would come by once in a blue moon, pushing the trolley holding all the returned books.

I was in a hurry to get to the library, shed my hat and gloves at the entrance, and hole myself up in the study hall with the art books. The first thing I did was to drape my coat over the back of the chair. Only after planting my flag in this way, would I go to the toilet or use my spare change for the coffee machine.

On the way back, I’d admire my spot from afar. There was my desk, waiting for me: behind the stacks and far from those long monastic tables which, as the day wore on, grew ever more crowded with students bowing over their sheaves of papers like lay brothers.

The blonde girl, a one-time rival for the desk at the window, now usually sat in the big reading room, her eyes full of defeat. She was skinny and sad-looking, and had always dropped the ball, either because she had to go to the bathroom, or because she dawdled too long in front of the coffee machine rummaging for the coins at the bottom of her bag. Eventually, what happened is what always happens to people who are consistently disappointed: she started to believe that the desk at the window was, in fact, mine.

So much the better for me. All the books I needed for my dissertation were readily available at the library—at that time no one else was interested in Chardin’s head wrap, Frangonard’s palette, or Caravaggio’s decapitated head—and when I couldn’t find what I wanted, I’d simply choose something else to look at. I had finished taking notes. I needed the portraits for inspiration and to keep my eye on form.

As I turned onto Herbert-von-Karajan-Strasse from Potsdamer Strasse, I spotted my father. In his hand was a leash and at the other end of the leash was our dog, Sergei. Ten years ago, we’d had to cut him loose on Mount Penteli in Athens. Sergei had gone mad and had started biting viciously. The last time he’d done it he’d clamped down on my elbow, and all the way to the hospital you could see my bone poking out under the shredded skin. After they stitched me up, my father drove him to the mountain. He threw a stick as far away as he could, Sergei ran to fetch it, and my father jumped in the car and turned the key. It must have been difficult. My father had never abandoned anyone. That is, of course, until he died.

I was sure it was him, and not only because of the dog. In my second year of graduate school I spent all my time poring over artists’ self-portraits: Schiele as a satyr; Frida Khalo, half-woman, half wounded doe; Goya in the arms of his doctor. The dissertation I was working on was tentatively titled “The Portrait and its Double: The Invention of Personality.”  I had read through tomes of psychology, phenomenology,  and neurology, focusing on issues of projection, identity and the construction of self.

My father was at a distance of about thirty feet. He was on the opposite sidewalk, walking with his hands buried in the pockets of his tan anorak, just as he had when he was alive. Underneath, he was wearing the sweater that my mother bought him for his last birthday, a yellow Lacoste number with a braided knit. And there were his tan, wide-wale corduroy pants with the baggy knees. His shoes, however, didn’t ring a bell. Only when I crossed over to his side of the street, not yet knowing what I would say, did I remember his beige Sebago lace-ups and how much he loved them. Whenever my mother wanted to throw them out, he would say, “Once I change the laces, they’ll be like new.”

I walked towards him. His small eyes, staring angrily at the horizon, looked as if he wanted to tear it to shreds. In the few seconds it took me to get to him, I noticed him sniffling nervously and clearing his throat. I could hear that terse khhhhm, the sound that made my father my father. The long sideburns, his overgrown eyebrows, the greying hair that was nonetheless styled as conservatively as if it had turned completely white a long time ago: everything was as I remembered it. Sergei cocked his ears and growled just as he used to. I had no final image of the dog in my mind’s eye, but I did of my father: before the coffin was lowered into the ground, I had kissed his cold forehead. I had cried a lot, then not as much, and in the end I had gone on with my life. I hadn’t been visited by ghosts, shades from beyond, prophetic dreams. Yet here he was, walking right into me without even noticing me. Not that this was unusual: my father inhabited a world that was all his own.

We were a stride—no, what am I saying?—a half-stride apart, and if he hadn’t had good reflexes he would have stepped on my boot. He looked at me suspiciously. Sergei sniffed at me and whined.

He mumbled something in German. It was his voice. He spoke the language better than I did, even though I had been at university here for six years.

My father didn’t speak German. Back in Greece, when he told stories about the Second World War, he’d recite in a terrible accent the words he’d learned during the Occupation. Driven by equal measures of fury and famine, he and his friends spent their time on two incompatible activities: they’d slash the tires of German trucks and beg for “ein bisschen brot”—a bit of bread. He said he had no hard feelings towards the Germans, that it was human nature to move on. In order to prove it, he visited me in Berlin during my first years at university. He admired the sidewalks, the linden trees, the churches. He admired the parks with their wooden playground equipment.

“Dad,” I said—but my voice couldn’t be heard.

My father asked me in German if I was all right. I scrutinized him from head to toe, searching for one false note. The familiar flat mole was on his cheek; the wedding band was on his ring finger.

He asked me if I needed help.

“You know him?” said my father.

I flung myself at him. I hugged him, breathed in the aftershave at the hollow of his neck. It was a familiar smell, and I wanted to stay like that a little longer, without talking. But I hadn’t counted on my father, pushing me off firmly, or on Sergei erupting with threatening barks. I took a step back. I knew firsthand the damage our dog could do.

My father raised his hands in desperation. He looked at me like I was a lunatic. I stepped aside and watched him walking away. He leaned a little to the right, as if still carrying his briefcase. How had he done it?  Had he broken out of his coffin and stopped by the house to get some clothes?  And then gone on to climb Penteli and find Sergei?  Why had he come to Berlin? To be near me?  He used to say he liked the city. And he must have loved me in his own way. In Berlin, we used to go to the opera together—the intensity of feeling was unbearable, but at least there was no need to talk. He must have learned the language quickly. He must be living in a small apartment with a television, eating spartan meals.

Who could I talk to about all this without sounding like a crazy person? I should have taken a picture of him with my cell phone so at least I’d have some proof. I ran back to Potsdamer Strasse. My father and Sergei had disappeared. I was running and shouting their names. Passersby stared at me in surprise. When a piercing voice echoes through one of those big European squares filled with icy air, it’s as if a film is being made. It’s always the same one: people disappear into a crowd; others follow, hot on their heels. In the film, the lost never return,  the soundtrack is either mournful or there’s none at all.

With hanging head, I turned back towards the library. At the glass doors, I raised my eyes and saw the blonde girl. She was sitting next to the window, at my desk. She had spread her books all over it, and was smiling triumphantly.

translated from the Greek by Patricia Felisa Barbeito

“The reason I am lonely, the amoeba thought, is that I am totally alone. So it had sex with itself and made another amoeba.”

The Reason I Carry Biscuits to Offer to Young Boys

“Was this maybe an extremely dodgy situation for me to be in?”