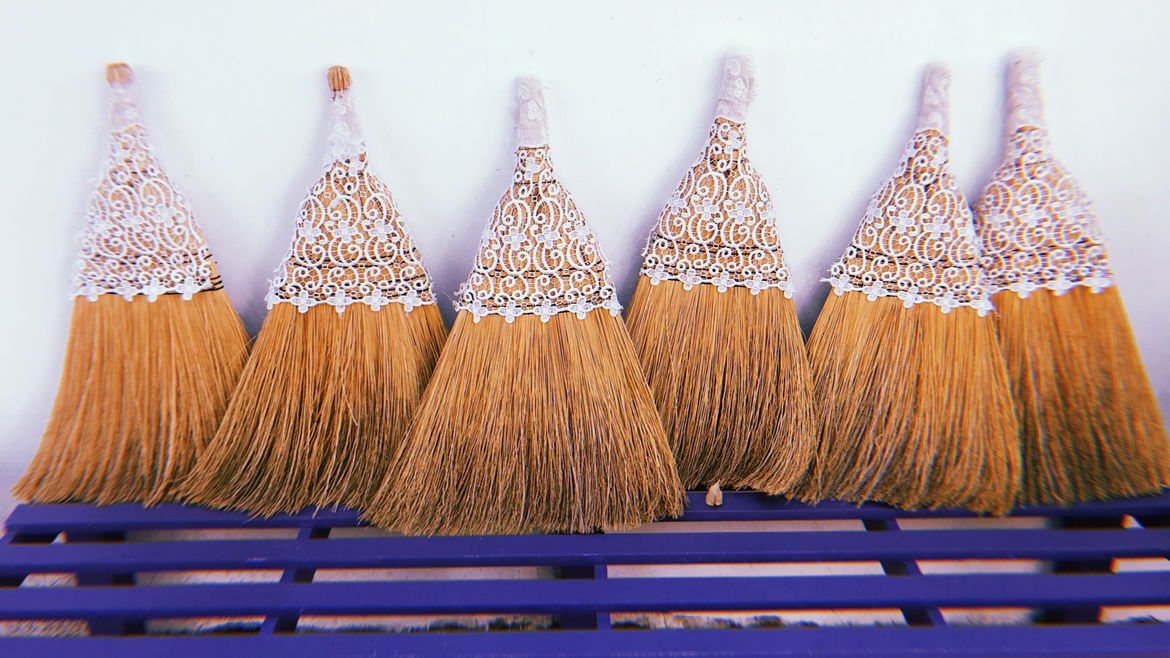 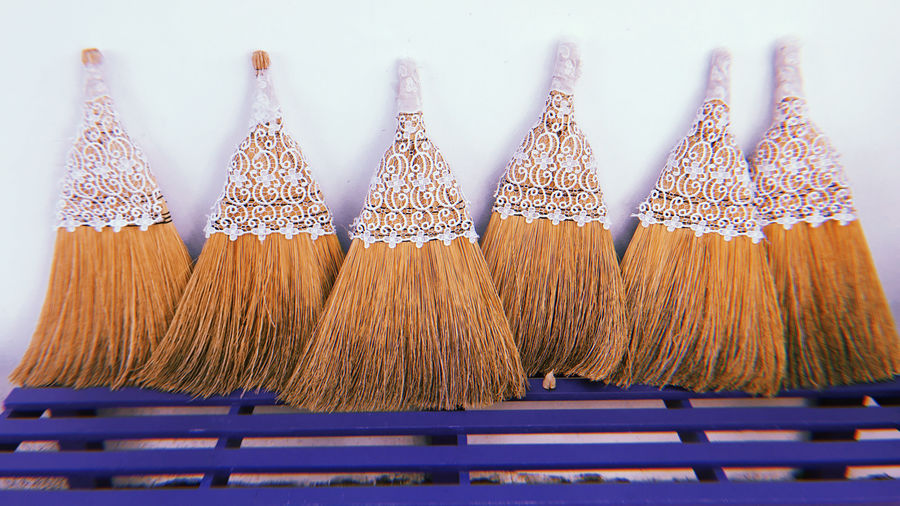 The Beauty Myth: What Keeps Us From Seeing Ourselves Clearly?
Angela Chen

Can a Bird and Its Nest Really Bring Bad Luck?
Dorothy Bendel
Columns | A Modern Guide To Superstition

When you first move into a new home, you should enter through the front door and exit through the same, or you will never fully settle in. Lighting a candle or starting a fire in a fireplace welcomes light and expels darkness. Ringing a bell in your new home brings good luck. Heating up milk with rice on a stove and allowing it to boil over the sides brings abundance and wealth. Salt can be sprinkled around doorways to repel evil spirits. Fennel stuffed into keyholes prevents witches from entering. Old brooms carry old “dirt” and bad luck; they should not be brought into a new home.

A cousin once told me that a new broom will sweep away evil spirits. “In bocca al lupo!” I recall her saying in a raspy voice, as I pack up my rented home in a small village to move to the city during the pandemic. “In bocca al lupo” means “into the wolf’s mouth,” a way of wishing luck by wishing the opposite. It was called to hunters as they set out into danger, like saying “break a leg” to an actor before they head onstage.

We didn’t plan to move during the pandemic, but a sudden school closure and the need to find another option within walking distance forced the move upon us. Already weighed down by anxiety as Covid-19-related deaths increased each day, I set forth on a frazzled search to find an affordable rental near my youngest child’s new school.

People were hunkering down, so few options were available. Most landlords refused to consider a family with a pet. We pleaded our case again and again, pushing the limit of our housing allowance. Finally, after two months of searching, we found a landlord willing to give us a chance.

Growing up, I learned to think of moving as embarking on a new adventure—what awaited must be better than what came before. I spent hours circling the block where I lived on Long Island, daydreaming of escape. Any possible future is preferable to the present when your home is a place of anger and violence, but I opted to dream big: I could move into the city and become a wealthy, eccentric artist. I could run away and study chimpanzees like Jane Goodall. I could become an astronaut and volunteer for a one-way trip to Mars.

Moving with my kids, during a pandemic, felt surreal. Covid-19 restrictions meant we couldn’t step foot inside our new home until the deposit and our first month’s rent were received; open houses and viewing appointments posed too much of a risk. We waited for confirmation that our application was approved, and then for confirmation that the transfers were complete so we could finally pick up the keys at the leasing office.

While we waited, the leasing agent sent us a video, a kind of virtual tour. It featured a pair of disembodied, latex-gloved hands that pushed each door open while the camera moved through the property, as though a ghost had already taken up residence. The tour was largely silent, save for the clicking of heels on wooden floors. I watched the video at least twenty times, obsessively pausing and zooming in for a clearer picture as the ghost guide entered each room. The enlarged pictures were blurry, and the camera was always positioned at an awkward angle. I wanted a soothing voice to fill in the gaps and describe what I couldn’t see.

Here is the sitting room, where you and your family will watch endless hours of baking-competition shows, and David Attenborough will explain to you how animals mate. Here, you will be safe from a virus that will kill millions and devastate families just like yours.

We hired the cheapest movers we could find, a small family operation that accepted cash only. I started planning for what I would bring into the house on our first visit, just a day before the move: a measuring tape, a notepad and pen to keep track of the measurements, a small toolbox, a flashlight. My grandmother once told me that I should always bring a new broom and a loaf of bread into a new home—she said that bringing bread into a home means that its residents will never go hungry.

And this is the kitchen, where you will stockpile cans of tomatoes and beans. Here, you will make sure that your children do not know the kind of hunger you’ve known.

Another superstition recommends bringing salt to your new home, because salt symbolizes permanence. In my experience, permanence and home are two words that don’t usually fit together. Some of the places I’ve called “home” include a one-bathroom house on Long Island shared by seven people; a house in a suburban development nearly indistinguishable from every other house around; a squat-house attic; a couch in Queens, where I outstayed my welcome; another squat house, this one in south Florida; a shelter for homeless youth; a dodgy apartment shared by a rotating cast of former-shelter kids; a Florida apartment with only one air conditioner, in the living room, where I placed my mattress so I wouldn’t die of heatstroke; a room in a duplex in Orlando; a shared apartment where random people would show up in my kitchen at two o’clock in the morning; another duplex, this one in Biloxi; a military-assigned apartment in Tokyo; a mouse-infested apartment in Washington, DC; a spider-infested rental in England; and other spaces I’ve tried to forget.

The more I moved, the more methodical I became about the process. Military moves conditioned me to look sideways at any item I considered buying and ask, “How much does this weigh?” Living without a home taught me that belongings had to be both essential and mobile. I felt a strange pride knowing that I could pack up an entire apartment in a day, no matter where I lived. An address, to me, was always temporary.

At the outset of each move, each upheaval, I hadn’t given much thought to what I would carry with me when I crossed my new threshold. No new broom to mark a new beginning. I’d already tried to sweep the past away, but it always returned. I left a childhood home marked by fear and abuse, but I felt its effects—the shame, the distrust—at the beginning of every new relationship. I left the shelter and the squat houses, but I still worry that I am always on the brink of financial ruin. The past haunts me, like a pair of floating hands following me from room to room. Time and experience have taught me not to expect everything to change with a move to a new home.

Lockdowns and quarantines have emphasized the idea of home as a place of refuge. The spaces where we feel safe and loved, where we feel we are part of a community, are our homes too. There are no specifications for what makes a home, no exact measurements of physical space that qualify.

Over the years, I’ve shifted my definition of home from the architecture of a house or an apartment to the configurations we establish through our connections with chosen family. I found a home with the girls I roomed with in the shelter, where we attempted to exorcise our pasts through the stories we shared, where we cried and laughed and encouraged each other to hold on because a better life was just around the corner. When I had a family of my own, I found a home that was deeper and richer than I ever thought was possible. It didn’t matter where we moved or how long we stayed at one location or another, as long as we had each other.

The movers arrived on a chilly but dry Sunday. Some say that moving on a Saturday or when it’s raining is bad luck. Others suggest only moving when the moon is waxing. I don’t think it matters what day we moved on, what the weather was like, or what phase the moon was in. I don’t believe that performing specific rituals will affect what we experience in our new residence. And I don’t believe that spirits guard our narrow old building—they wouldn’t be welcome if I did believe in them. I have my own ghosts living in me, and our home is already full.