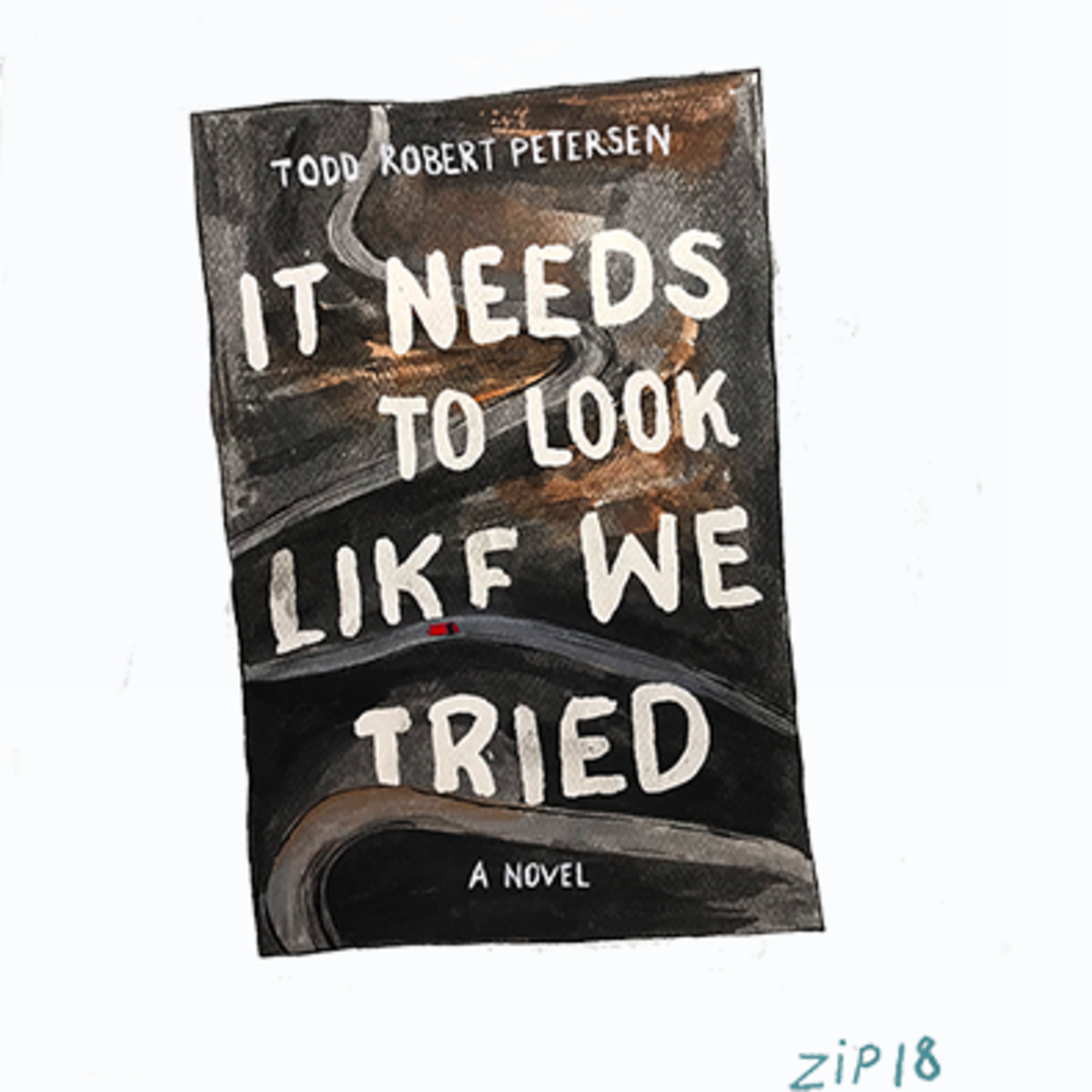 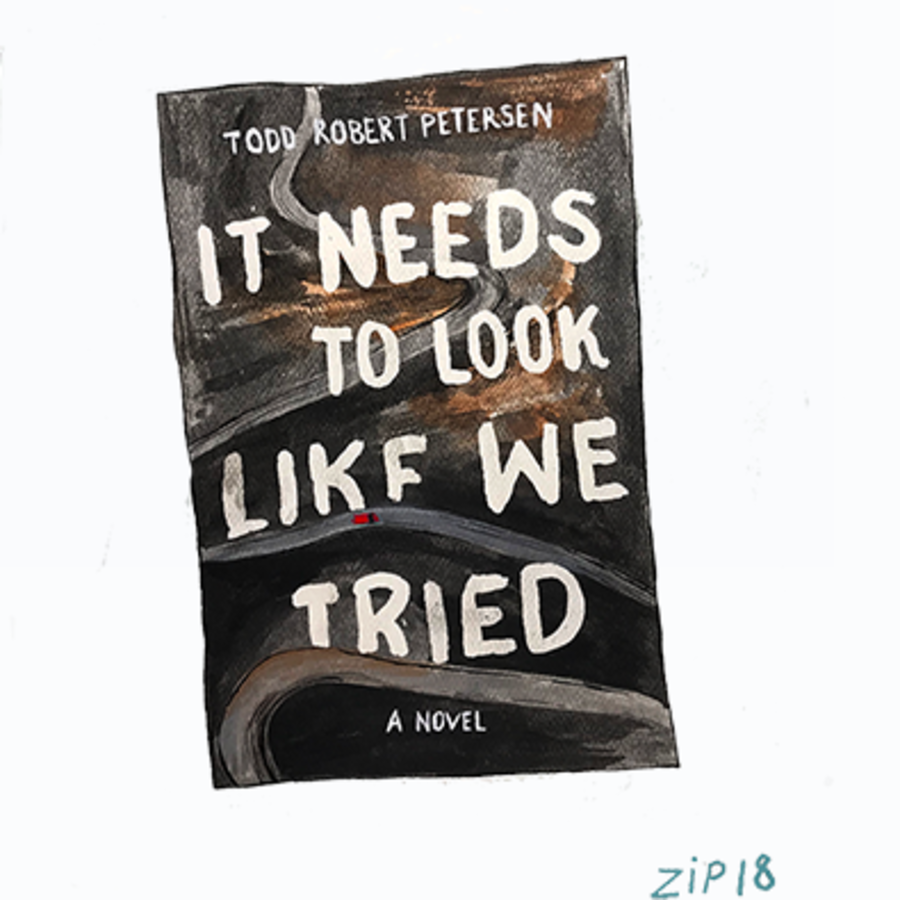 IT NEEDS TO LOOK LIKE WE TRIED: A Sneak Peek Comic by Zoë Petersen

“I love creating situations that will surprise the character and force them to make difficult choices.”

Todd Petersen’s novel It Needs to Look Like We Tried is out today from Counterpoint Press, and his talented daughter Zoë Petersen was so excited she created this sneak peek comic in the book’s honor! Enjoy Zoë’s beautiful comic, then read on for a fun father/daughter Q&A about art and writing.

Todd P: Zoë, what was it like when you learned that Megan (from Counterpoint Press) loved your Valentine's Day comic about the girl who takes herself on a date so much that she asked me if you'd be interested in doing a comic about by new book, It Needs to Look Like We Tried? Was it weird?

Zoë P: No. I was excited and kind of proud that she liked it, but I was nervous because I felt like it needed to be really good. It's also scary to draw somebody else's idea.

Todd P: Your art work usually comes from your ideas, but recently you did an illustration project in your English class where you drew some passages from Fahrenheit 451. That was cool.

Zoë P: I was nervous the drawings for your book wouldn't look like you imagined it to be. Working on the Fahrenheit 451 assignment was similar because I had to draw something that was already out there, but it was also different. I didn't have input from Ray Bradbury. I just had the book. For your project, I got to talk to you, and you gave me input about things, which made me feel better.

Todd P: It would be awesome to have a conversation with Ray Bradbury, wouldn't it?

Todd P: But you've done "fan art" before: drawings based on movies and television shows that you like but done in your style. Did the illustrations you did for my book and Fahrenheit 451 feel similar?

Zoë P: Usually if I do some kind of fan art it's from a TV show or a movie and not from a book, so I already have the images in mind. I mostly take what's out there and put it into my own style.

Todd P: So, is it scary to pick the "right" style and make it match people's expectations?

Todd P: Writers have that concern all the time because there's the way we imagine something, but when a book goes out into the world, it doesn't get to be your book any more. All the people who read it, they're going to have their own ideas about how things look and how the characters sound when they talk, just like you did. In a way, a reader is always making their own comics inside their own heads. The cool difference is we get to see your drawings. Readers can't always share what they saw. With this book coming out, we're kind of having the same worry, aren't we?

Zoë P: Yeah. We are. When you write something, do you start out with a plan?

Todd P: I almost always start out with a plan. Sometimes I write it down, sometimes it's just in my head, and sometimes I draw it. I like to draw maps and diagrams and arrows so I can see things. Once I asked your mother to sculpt the two main characters of a novel so I could keep them on my desk. But most of the time I plan things by telling your mother about it, then she tells me if it’s a good plan or if it's dumb. So, I usually have a plan, but I almost always do something else once I start working. The story starts telling me what it wants to do. It's weird but true. Does that ever happen to you?

Zoë P: That's how it was for the Valentine's Day comic. I had a few ideas, just some doodles I started with, then it kind of took over and became an actual story. Maybe this is different, but I've seen things online that say if you're stuck in your story, you should "break" your character, like do something bad to your character. Have you ever done that to get unstuck?

Todd P: All the time. I love creating situations that will surprise the character and force them to make difficult choices. Stories aren't any good if we're not worrying about the choices the characters make. Sometimes, I like to "break" the story to surprise myself so I'll keep writing. I try to make myself want to know what's going to happen next. I think it's hard to keep the reader interested if the writer is bored. Do you ever surprise yourself in a drawing?

Zoë P: Yesterday, actually. I drew a picture that was just a kind of warm-up drawing of a girl who was relaxed, in a spread out pose, falling through space. I made it and had it all the way painted, and all the sudden I looked at it in a different way. I realized that it would work well if I did it differently. I took the girl in the same pose, then put her in pajamas and changed the background so that it looked like what she was dreaming about. I drew it without really thinking about it, and it became completely different from how it was at the start.

Todd P: I stole the idea for comic you did for me from that comic you did for Valentine's Day. I liked the design of having a 9 x 9 square built out of smaller square panels. Squares are good for Instagram. That was so smart of you. And for the content I thought, maybe it would be cool if it worked like movie trailer that quickly covers some of the major story events without giving any-thing away. Does it feel like a trailer to you?

Zoë P: Yes. Because all the stories are so different but connected, I tried to draw it using the style and the color palette so it would feel like part of the same thing.

Todd P: Your drawings really do make it feel that way and not just a whole bunch of stories crammed into a box. I love that the comic you drew could show a reader all these different parts in a quick glance and make them start asking questions. That's a great way to hook readers. Which panel was your favorite to draw?

Zoë P: I liked drawing the "business meetings" one. It was also one of the ones I was most nervous to draw because it lots of things I hadn't drawn before: the glass windows in the back and everyone all close in. Usually I draw things from farther off, so I had to learn how to do closer up. It was fun to think about because I wanted to know what was going on to make a crazy meeting like that happen.

Todd P: My favorite thing you drew was the perfect Mona Lisa smile on the pig. The pig is one of my favorite parts of the book, and when I saw that panel, I was like, "yes, you nailed it." I loved working on this with you.